We are exploring 4"x4" tubing for the Power Cube to make it a self-contained, structural unit.

The reason for the 4x4 frame is that we want to use it like building blocks - to stack these like Lego Blocks. If the Cube is a structural unit in itself, we can attach other things to it, such as a 3 point hitch. It can be a complete building block. If it's not structural in itself, it needs to go inside a structural frame, making the structure much larger and awkward than necessary. We want to address the infinite scalability issue: putting on as many power cubes as needed. This is harder when each of them is too large.

The Power Cube is an interchangeable power source. This design approach satisfies a number of the OSE Core Values.

Definition - The Power Cube is a universal power unit, and it is a module that can be attached to the LifeTrac, Microtrac, Bulldozer, and Open Source Car (OSCar) platforms. As such, any of these platforms can be used as power sources for other devices, such as workshop tools, power generators, ironworker machines, or any other devices which require a power source. The key to this flexibility is the self-contained nature of the Power Cube, where quick-connect hoses and quick-connect physical mounting allow the Power Cube to be coupled to used with other devices. It has frame-integrated fuel and hydraulic reservoirs. It currently contains an 18 or 27 hp gasoline engine, coupled to a hydraulic pump, and produces fluid flow up to 15 gallons per minute and up to 3000 pounds per square inch (PSI) pressure. It connects to other devices via quick couplers and quick-connect hydraulic hoses. A modern steam engine will be retrofitted as soon as it is developed to allow complete fuel flexibility

Solution – By decoupling the power unit from a powered device via quick-attach coupling – it is possible to turn a dedicated power unit into a flexible power module. We have shown proof of concept – in that power units can be shared between different machines. This allows for drastic cost reduction in the overall cost of mechanical infrastructures.

Status – Check with Tom Griffing, project manager, on latest status. Power Cube Prototype V is being built currently. Prototype IV is relatively stable and is in use at Factor e Farm. 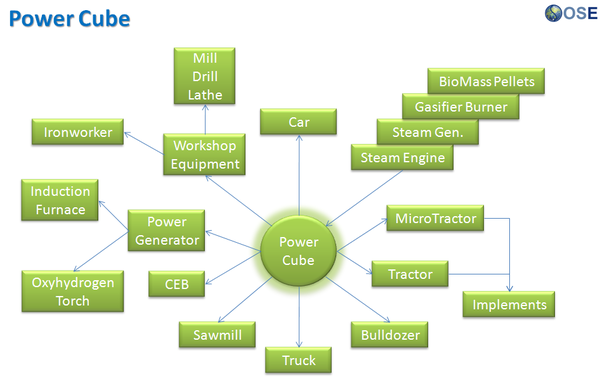 The current iteration of the power cube is an off-the-shelf gasoline engine, but the design is intended to be as power source agnostic as possible so that the power production can be readily changed. There will likely be many variations on the power cube design, but all fitting inside a similar size profile so that a GVCS machine can readily swap out one Power Cube for another.