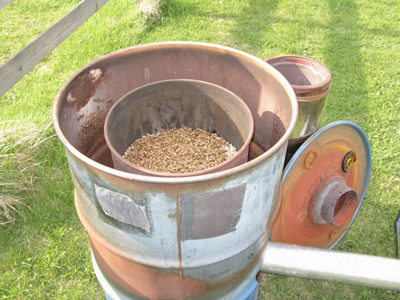 Industrial Agriculture relies heavily on pesticides and toxic chemicals that, while effective at controlling weeds, have a variety of drawbacks.

Traditionally, organic agriculture has relied on tillage or cover cropping for weed control. While these methods avoid the use herbicides, they have their downsides. Tillage can damage soil life and structure, resulting in a loss of valuable nutrients and organic matter. Cover crops may attract pests, delay ripening and compete with cash crops for nutrients and water. Flame weeders have been used with success, but often rely on propane gas from fossil sources.

Enter the pyrolysis-powered steam weeder, which puts out superheated steam to kill weeds. This device can use all kinds of dry biomass for fuel. Pelletized biomass such as wood pellets should work well. Pyrolysis releases heat which turns water into steam. The saturated steam from boiling water runs through a copper coil which is externally heated in the pyrolysis unit, creating the superheated steam. Biochar is generated as a byproduct, making the process carbon-negative.