OSWASH website: http://www.oswash.org/ . This was a project aiming to build a cheap open-source washing machine, but nothing seems to have come of it. There are no designs on the website, and no updates for the past year. The biketech projects below are more active.

The open source washing machine project aims to rethink the way we wash clothes around the world, in accordance with economical, sociological, cultural and environmental aspects. Around the planet, most people - mostly women - wash clothes by hand in harsh conditions because of poverty, lack of sanitation, water or energy.

The project was born in spring 2008 during an Open Source Hardware workshop for artists in Craslab Paris. The Freeduino board is a piece of low-cost Open Source Hardware created to replace the systems that manage sensors, actuators or data acquisition in many devices. This electronic board is used by artists, designers, architects...

The idea of a DIY electronic washing machine using recycling parts and an open source microcontroller was born. “Let’s do it!”. But immediately, we knew that this was a Western-style project for rich countries only. Here in rich countries, we are able to use industrialised washing machines because we have electricity, running water, sanitation and detergents. But for more than 2 billion people, there is little or no water, no running water, no energy and no opportunity to buy and maintain a Western-style washing machine - even one made with recycled parts.

We had to find something different.

We had to rethink the economical, sociological and technical concepts of washing clothes from a mindset of sustainable development and respect of the natural and human environment.

We had to rethink the role of technology in day-to-day life, particularly as applied to the laborious activity of washing clothes.

How can we use open source technologies to solve both global and local issues? How can the exchange of knowledge, through open resources and open source communities, create the organisational model for such projects? How can the model of self-organisation and technological autarchy save us in the coming years, when the effects of the petrol/climate crisis will deeply affect all civilisation?

Bring your dirty underwear and join this workshop by sending a mail to summercamp@timelab.org!

"The open source washing machine project aims to rethink the way we wash clothes around the world...

The idea of a DIY electronic washing machine using recycling parts and Open source microcontroller was born in spring 2008 during an Open Source Hardware workshop for artists in Craslab Paris.

We are considering making an industrial-scale washing machine by attaching the hydraulics of LifeTrac to the Universal Rotor to spin a vat full of clothes. This is one implementation using available power sources.

Maya Pedal are developing an open-source pedal-powered washing machine. It is in the prototype phase and there are no plans online yet (March 2011).

And another one: The Cyclean. As of March 23rd 2011, it says, "Update: We are currently working on getting some plans up on here so you will be able to make your own". 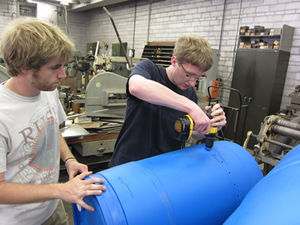 My name is Andrew Lowe and myself and another TU student are in charge of the Pedal Powered Washing Machine product. We've nearly completed the first prototype, but unfortunate we didn't make any detailed plans. I can, however, give you some of the details of what we built and how we built it:

-We designed our machine primarily from videos we found on youtube of other machines that have already been built.

-The tub is made of two rain barrels. For the outside, we used a 55 gallon barrel. The only modification you have to make to this one is cut a hole in the top large enough to get your second barrel in. For the inside, we used a 30 gallon barrel and drilled small holes all around it to let the water in and also keep the clothes in. On this barrel we cut out a door and attached it with hinges and a latch. These barrels ended up being much too large and took too much water. When we rebuild it we're going to use smaller barrels.

-The outside barrel is mounted on a frame, keeping it from moving. The inside barrel has a shaft coming out of each side of the large barrel. This connects it to the drive shaft from the bike.

-For the drive shaft we just mounted bike pedals on a separate frame and connected that to a bike gear that turned the inside barrel directly.

-We plan on adding a gear shifter to make it easier to get up to higher speeds for spin-drying the clothes.

Like I said, the first model has a few problems and we're going to try to rebuild it on a smaller scale. Next time we'll make more detailed plans.