A Flexible Gearless Extruder is one of the distinguishing features of OSE's D3D Universal 3D printer of 2019, which is being introduced as the standard extruder for D3D Pro, Pro 2, and Pro 3 in early 2020. 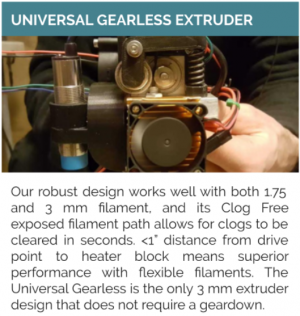 We have experimented with various extruder designs since 2016 - see 3D Printer Genealogy. We started with the common MK8 Extruder in 2016. The MK8 is a simple, gearless design, but it works only with 1.75 mm filament. Further, it is a design that one buys commonly off-the-shelf, and it requires some machining if one is to build it in a DIY fashion. Further, we could not find any well-documented, open source versions at the time.

Given that the Prusa printers were exploding as a popular, open source brand at the time - we switched to the Prusa i3 MK2 Extruder. You can read more notes on our experience at Extruder Improvements from MK8 to Prusa i3 MK2 Extruder. We modified the Prusa i3 MK2 for a larger, 8-mm distance sensing probe - as we are interested in large prints and less risk of the height sensor hitting the prints. You can view our design details at Prusa i3 MK2 OSE Mod. While it seemed that the current, open source design from the most popular hobby printer company may be the best design - we found the choice to be terrible. We could not prevent the Prusa i3 MK2 from persistent clogging. The only way we succeeded was by disabling retraction all together, which meant lowering of print quality. This choice was particularly troubling because we ran a workshop in 2018 based on the Prusa extruder, leaving many of the participants frustrated.

We switched to the E3D Titan Aero - the same as our poster-child Lulzbot 3D printer company was using in their more industrial-grade (compared to Prusa) printers. This change meant a switch to the most well-known, open source leader in 3D printer extruders - E3D. Lulzbot's Jeff Moe succeeded in getting E3D to open source their designs, which meant that we were consistent with our philosophy of using open source parts. Further, the Titan Aero was a decent design for printing with flexibles. Since OSE plans on 3D printing rubber tracks and sprockets for tractors, effective rubber printing is critical for OSE's industrial productivity on a small scale. The Titan Aero features an integrated hot end heat sink, meaning that the long, finned heat sink of the common E3D V6 or J-Head design is not needed. Simply put - E3D V6 or J-Head can't print efficiently in rubber: you have to slow the print rate way down in order to do it. The shorter the distance between the extruder drive gear and the heat break - the faster the print rate. The Titan Aero was the best 3 mm design for sub-industrial grade printers on the market at the time.

In 2019, OSE created an improved design with a filament path even shorter than that of the Titan Aero. We have reduced the distance between the drive gear even further to about 28 mm, from Titan Aero's 44 mm! See Universal Gearless Extruder Design. The implications are the ability to print with softer flexibles, and to print faster with flexible filaments. As of mid 2020, we offer the Universal Gearless extruder as the standard on all of our 3D printers.

Have you considered power tapping, say by using a corded drill? What are your thoughts on that?

It can be done but the trick with tapping is to tap square. That's hard to do with a hand tool. The 6mm tap is a pretty rugged but with smaller ones it's also easy to break the tap. The hand tapper gives more control while keeping everything square. If I was going to be doing this on a regular basis, I'd invest in a power tapping head for the mill. If the cnc machine is set up for coordinated motion with an encoder on the spindle and ability to move very slowly (mine isn't) you can do rigid tapping. They even make custom tooling that incorporates a drill bit with a tap. You can drill and tap without a toolchange. That kind of tooling is expensive but you make up for it with enough volume.

How long did the actual bandsawing take per heatsink, and the later steps per operation, roughly?

cycle times are hard to say. Only counting machine time...

I got pretty efficient moving part to part but it still worked out to about 8 hours of active time.

Basically I'd use Path to set up the origin datum for the part so it matched the touchoff on the machine (top/back/left corner) Then I did a simple drilling op to get the coordinates and drilling move. This is one line of gcode per hole with parameters for speed, peck depth, dwell, etc. I post-processed that file to get the gcode but then I hand-edited it for running in bulk. The issue here is that starting and stopping the spindle is slow. I wanted to move the spindle out of the way but leave it running while I switched parts. That meant wrapping most of the gcode execution in a loop with an optional stop block. That's a really unique requirement and I've never seen the need to generate a looping block like that from a Path job. While I stood there mindlessly feeding parts, it gave me time to think about whether this might make a good feature someday. We'll see.