Open Source Ecology is involved in researching, developing and building open-source technologies for clean, local electricity-generation. As well as solar power, we like wind power. Wind power or solar or both may be appropriate, depending on local materials and local weather conditions.

Specifically, we are interested in open-source designs for a wind turbine that can provide electricity for a small community. Small wind turbines like this are usually 7 feet (2m) to 25 feet (7.6m) in diameter.

Open Source Ecology Europe and -Germany are working on a prototype VAWT design: Germany/Wind_Turbine. Research and development is currently concentrated at TiVA, a tiny wind turbine prototyping platform. With this very small turbine, we can easily change parts, try out new ideas and increase the quality of the design on a small scale in a fast and inexpensive way.

Several wind turbines have already been open-sourced and it should be possible to use them for the Global Village Construction Set:

What kind of turbine? 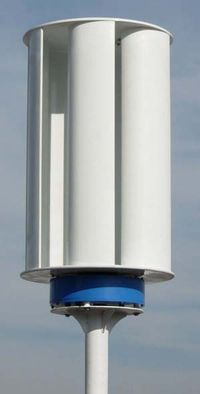 Verical Axis Wind Turbines or VAWTs offer a number of advantages over traditional horizontal-axis wind turbines (HAWTs). With careful layout they can be packed closer together in wind farms, allowing more in a given space. This is not because they are smaller, but rather due to the slowing effect on the air that HAWTs have, forcing designers to separate them by ten times their width. VAWTs are rugged, quiet, omni-directional, and they do not create as much stress on the support structure. They do not require as much wind to generate power, thus allowing them to be closer to the ground. By being closer to the ground they are easily maintained and can be installed on chimneys and similar tall structures.

In addition, by being closer to the ground, VAWTs have the ability to take advantage of the tunnelling effects of small buildings and structures (provided the structures are build close enough) small VAWTs are also used in corners of buildings (usually the corner of a balcony).

Although VAWTs are not as efficient as HAWTs they are considered more reliable and much easier to maintain. Some disadvantages of VAWT are:

A good step by step guide can be found on this link: a small Savonius wind turbine that takes advantage of the Venturi effect.

There is a small scale printable VAWT on thingiverse http://www.thingiverse.com/thing:6899 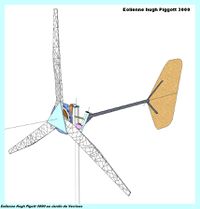 Scoraig Wind has proven the viability of low-cost HAWTs using short wooden blades on a high-rotational-velocity freely-spinning rotor, with hand-wound alternators, in contrast with typical high-power commercial HAWTs that slow blades down using a gearbox (usually the first part to break down, sometimes with a ~5-year service life, and even catch fire during storms), however their plans are not yet open-source.

Wind Lens style turbines have been shown to increase the power output of a HAWT by 2-5 times for a given size, and some designs for appropriate shrouds are freely available.

A turbine attached to a lighter-than-air ballooon, such as being developed by Magenn. I think we can reject this as too complex and too experimental for our purposes.

A high-flying power kite tethered to a generator on the ground. The kite tugs on the tether, which spins a turbine and generates electricity. All the machinery can be kept at ground level; only the sail is airborne. This allows for easy maintenance.

The two main advantages of this design are that reaches the more powerful winds higher up, and it may come in cheaper than a turbine. This report from the WPI Kite Power Team says there is an "anticipated 50% cost savings over wind turbines".

This would need to be attached to the open-source electric motor we're designing, and a microcontroller. All the hardware is on the ground, which makes maintenance and set-up easier. The control will be the main design challenge.

A critical step to make wind profitable or optimal is putting the turbine in the right spot or site (turbine siting). This involves two main factors: the speed of the wind and the turbulence in the wind. Since the energy available in the wind varies with (E ~ v^3) a site with slightly less speed can produce a lot less energy. Siting requires measuring the speed of the wind for at least a year with a measurement mast (or small weather station) in a spot close to the site of the turbine. There exist open-source software to then propagate the measurements (using more or less complex computational fluid dynamics) to find the speeds on the topography. One example: http://awsopenwind.org/

VAWT windmills are one of those things that many inexperienced people find the holy grail in, and they could work, but are there any economically competitive variants?

The analysis that one should do is this:

So my conclusion is that unless there is evidence that the performance to cost ratio can exceed that of HAWT designs, we should go with the HAWT. This has to consider the lifetime of the turbine.

Qblade (TU, Berlin) Released under GPL. This software provides an open solution for the design and aerodynamical computation of wind turbine blades. QBlade also includes post processing of conducted rotor simulations and gives deep insight into all relevant blade and ro tor variables for verification, to compare different rotor configurations, or even to study the numerical algorithm (Blade Element Momentum Theory) and the dependency’s among the aerodynamic variables themselves. It integrates with XFOIL, also released under GPL. For more details see for example papers and research

FOCUS 6 (WMC Knowledge Center, Wieringerwerf, the Netherlands). Unknown license, but the development was partly paid by European and Dutch tax payers. FOCUS 6 is an integrated modular tool to design wind turbines and wind turbine components like rotor blades. For more than a decade, FOCUS has been used by the international wind turbine industry. more details in this presentation

Back in the golden age of the Dutch, their booming economy was powered by wind in all sorts of incarnations (see article from Low-tech Magazine - Wind powered factories: history (and future) of industrial windmills). Wind provided a lot of energy but one big problem was that this energy had to be used at the time that it occurred, with very little ability to store it for later use. Now in the 21st century, we can use hydraulic implementations to solve this problem. As builders of the GVCS, we are quite familiar with hydraulic systems from projects such as LifeTrac. A hydraulic transmission can also be used for stationary applications and powerd by wind. The "mill" that harvests the wind is coupled to water pumps, generating hydrostatic pressure. With a storage reservoir (water tank at higher level), this energy is available at any time, powering hydraulic motors.