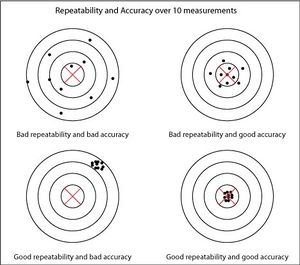 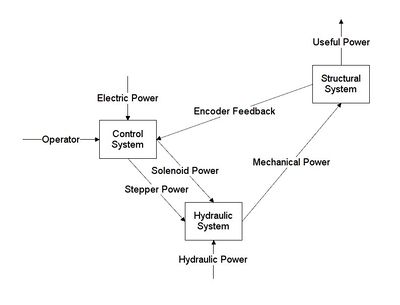 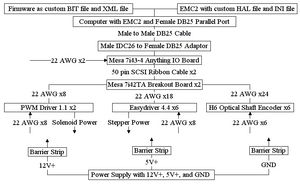 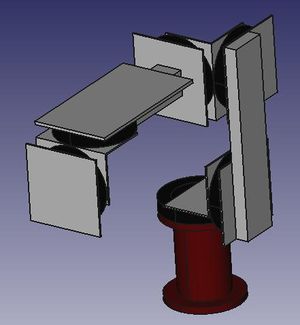 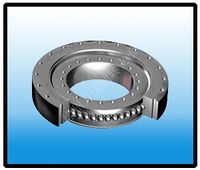 Wanted: List of expenses for prototyping and documenting GVCSTool

Wanted: Peer reviews from the scientific community regarding the R&D of GVCSTool

The function of the shaft encoder is to determine the position of a motor shaft as time passes. This function is necessary for the industrial robot to perform tasks with accuracy, because the robot's movement is determined not only by the power supplied to the motors but also the load being moved.

Hall-effect absolute encoders -- packaged (US Digital, Renishaw) or chip -- are simple and pretty cheap, compared to optical absolute encoders. Unlike opticals, the magnetic devices usually have limited absolute accuracy (~0.5 degree) even when they have fine resolution/repeatability.

An optical incremental encoder can have a "smart" index track which has a digital pattern instead of just a single slit; this allows the microcontroller to reset its angle counter after only a small amount of movement. Gurley offers this as a product, but we could also design an open-source version (it wouldn't be hard to skirt this patent).

Note that the repeatability of a robotic arm is determined by a repetition test where the arm moves to and from a desired point a given number of times while measuring the inaccuracy each time it stops; it follows that the observed value of repeatability is imperfect, though a high number of trials can reduce the uncertainty.

When a robotic arm is commanded to move and stop its end-effector at a certain location, shaft encoders determine where the robot stops moving. Shaft encoders measure the angular position of the shaft (ex. 45.6 degrees) but must do so in intervals (ex. between 1 and 4 degrees, between 4 and 7 degrees, ...). Therefore, the resolution of the shaft encoders significantly affects the repeatability of the robotic arm (the higher the resolution, the smaller the intervals); increasing the encoder resolution will improve repeatability.

connects the gearbox's support hub to the encoder's shaft

connects the shaft encoder to the microcontroller and power supply

connects the coupling to the gearbox's support hub

connects the coupling to the encoder shaft

mounts the encoder onto the main angle